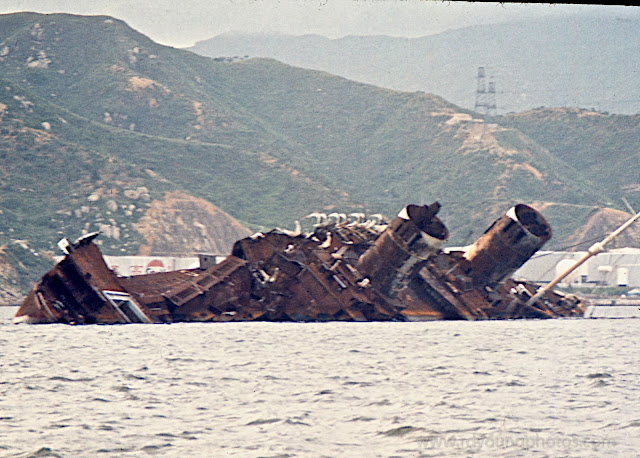 Photo of sunken Elizabeth cruise ship taken while on R & R in Hong Kong in 1973. Ship caught fire and overturned the year before in 1972. In 1975 the top half of ship was dismantled while about half remained on harbor seabed which was a hazard to shipping. In 1990 the underwater wreckage was covered by a harbor land reclamation project.
Posted by rdyoungphotos at 2:54 PM 1 comment: 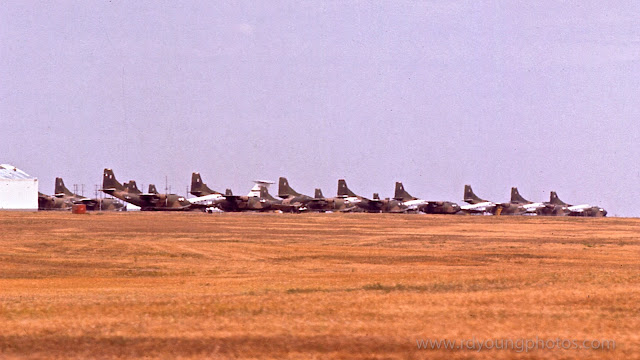 Very neatly arranged array of alternating C-123 Providers and C-47 Gooney Birds on ramp at Clarke Airbase, Philippines 1973. Including tails visible in the background there appears to be at least 18 C-123's. It looks like these belonged to USAF from markings barely visible in photo. I did some quick research, but did not discover what wing or function these aircraft might have had although perhaps it may have been a redeployment ... just don't know as our C-130 crew was only a transient visitor to Clarke. The C-123 provided a large number of roles in Vietnam War besides medium transport: dispersion of Agent Orange (Ranch Hand), covert operations including CIA, illumination (Candle), and more. There was a gunship version of the C-47 called Spooky. There appears to be a gap in middle of photo where there is no C-47 between 2 C-123's; however on close inspection there is a C-47 there only it's camo and not white. Also in background is white   tail of a C-141 transport with high mounted horizontal stabilizer. An accountant must have been responsible for the aircraft parking arrangement :-)
Posted by rdyoungphotos at 5:01 PM No comments: 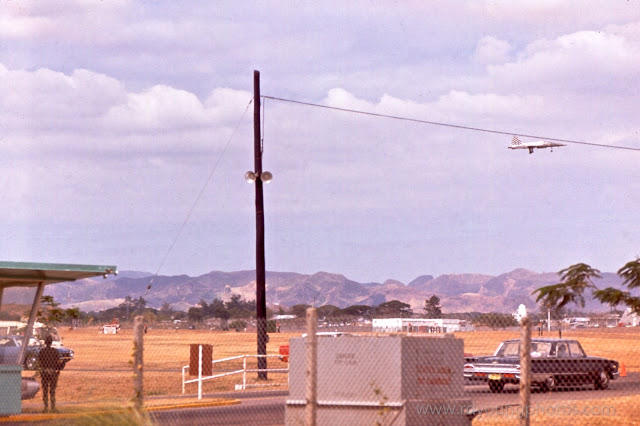 Pictured is portion of Clarke Airbase in the Philippines which I visited on numerous occasions while in SEA 1972 with rugged mountains in background. This was a very important base during Vietnam War including a very large military hospital. First visit I made to Clarke was for USAF Jungle Survival School based in nearby jungle via a quick rocky ride in large transport helicopter. Second  visit was via a DC-9 Nightengale medivac jet when I spent 2 weeks in the hospital with an undiagnosed "jungle fever". Several other visits there were with C-130-E crew for operational assignments. Generally Clarke was a fun place. Remember playing liars dice at officer's club late at night, and shopping for "monkey pod" (wood carvings) at offbase shops in Angeles City. There never was enough transient on-base housing so our crew always spent overnights at local motels that had lively bars, and "covert" gambling casinos ... we usually stayed at the same place but I can't recall the name. There were Filipino uniformed, armed, government guards everywhere offbase as this was a time of Marcos martial law. Photo shows some old autos as well as a F-5 fighter (upper right) which was an armed version of the twin engine T-38 jet we flew in pilot training and which the USAF Thunderbirds used during their air shows for a period of time. The USA pulled out of Clarke and Subic Bay (important naval port) in 1991. The pullout was coincident with eruption of Mt. Pinatubo volcano which showered Clarke with ash and debris as well as cooling relations between Philippines and USA. Recently read in 2012 that USA may return to Clarke.
Posted by rdyoungphotos at 3:35 PM No comments:

Posted by rdyoungphotos at 3:01 PM No comments:

Peace at Ban Me Thuot 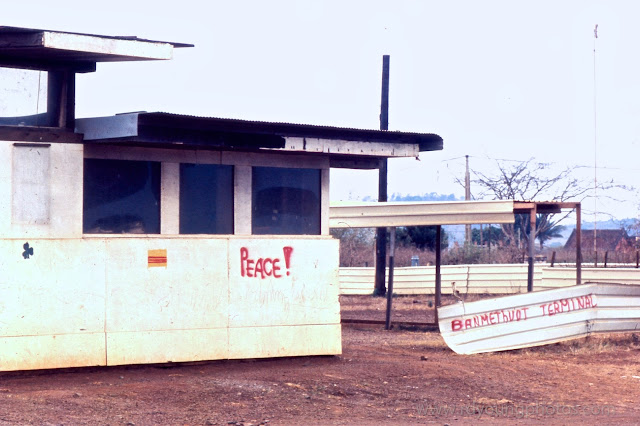 As the sign reads "PEACE! ... BANMETHUOT TERMINAL".  1973 photo of primitive terminal next to aircraft ramp at Ban Me Thuot Airfield in the Central Highlands of Vietnam. The airbase was pretty much abandoned when we landed there with disintegrating ramp, taxiways, and buildings. Lots of signs of intense battles that had taken place there earlier during North Vietnamese offensives when the base was occupied.
Posted by rdyoungphotos at 4:21 PM No comments: 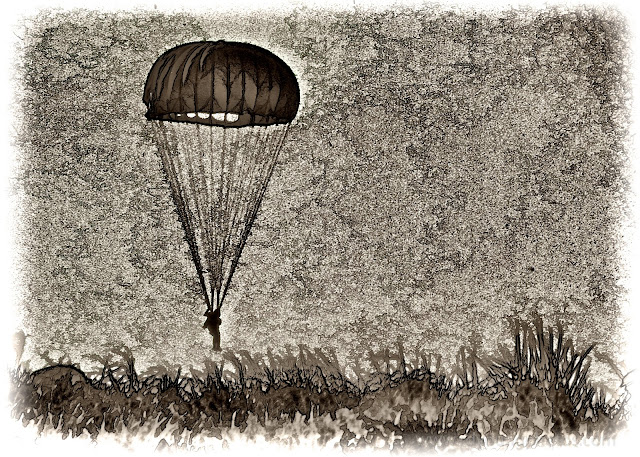 Photo that I stylized depicting touch down of airborne trooper in drop zone (DZ) in 1973. Most of the airborne exercises we participated in within SEA were not operational. Generally this involved static line training jumps of troops from doors designed for that purpose aft of the wings on both sides of the C-130. On this occasion we were part of the drop zone ground team helping to direct C-130 crews flying above. Balloons, smoke flares, and ground-to-air radio communications were used to convey ground conditions to the aircrews above so as to help provide safe, timely, and accurate flight path for the paratroopers. Red-to-green lights in rear of C-130 controlled from cockpit were used to signal precise time to jump. Note cutout panels in parachute which allowed maneuverability to the jumper.
Posted by rdyoungphotos at 2:57 PM 1 comment: 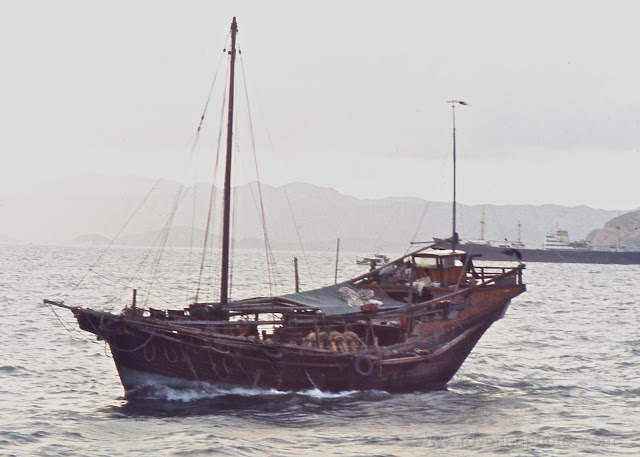 What I think would be referred to as a junk motoring without sails. Taken in Hong Kong harbor during a side trip outside the war zone in 1972-73 time frame. Vessel probably transported cargo, and also doubled as family home. What appears to be several seated children can be seen up on the stern of the boat.
Posted by rdyoungphotos at 6:26 AM No comments: 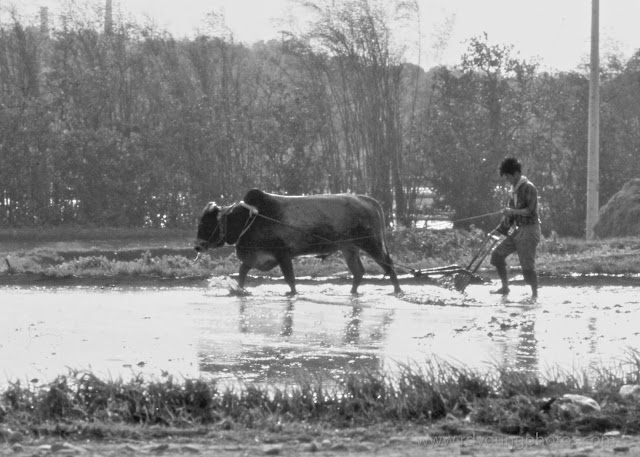 Beast power, no gas required. Somewhere in SEA, 1973. Doing rice patty cultivation the old traditional way. Not sure what type of animal this is although it resembles the kind used in rodeos, but with a somewhat milder temperament. These rice patties were often directly next to some of the more remote runways we landed on.
Posted by rdyoungphotos at 6:07 AM 1 comment: